astartingtorun June 4, 2020
The running speed does not develop by itself, but work has to be done for this. You may have been running for a long time and running makes you feel good. Running speed is only developed by running, but running speed can also be developed with different exercises. With these tools, you improve your running speed while avoiding injuries that can occur over long distances. 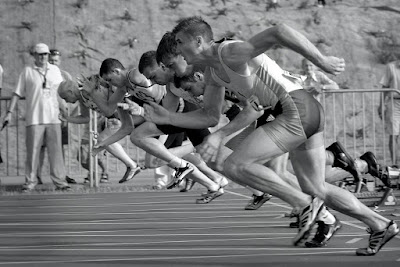 Interval training
Adding interval training to running workouts not only brings variety but also improves running speed. For example, you can vary the running pace every two or three minutes during a run. Run for 30 to 60 seconds as hard as possible, then return to your normal running pace. As interval training progresses, you will find that you also increase your own basic rhythm, as it will soon start to feel too slow.
running tempo
A rhythm running exercise is called a running exercise that begins and ends with light jogging and in which a more difficult exercise is done at a pace that accelerates regularly in the intermediate stages of the running loop. It is a good idea to do the quickest part of the running exercise for about 10 minutes at the start and later to extend its duration a little at a time.
The descent is a great way to develop the absorption of oxygen as well as the muscles of the buttocks and thighs. These three factors are essential for increasing running speed. When descending, it is essential to try to keep your breathing and your steps at the same rate. After a downhill practice, running exercises performed on a feeling of stability feel easy.
Strengthens the gluteal muscles
Most runners are guilty of relying too much on the front thigh muscles when jogging and completely forget their buttocks. However, the large buttock muscle plays a major role in producing running force. The functions of the gluteal muscle when running are to push and stretch the leg backwards. The more you want to run, the more you need the help of all the big muscles in your legs throughout the trajectory. So be sure to regularly strengthen your buttocks.
Stretch regularly
The hind legs and flexors of the runner’s hips are usually stuck. The stuck muscles are unable to function effectively and the trajectory of the legs narrows. The running speed will not increase because you will not be able to ride efficiently with your feet. This step remains incomplete and ineffective. So be sure to pay close attention to the movement of your legs if you want to increase your running speed.
Pay attention to posture
The more difficult the rhythm, the more the upper body requires running. It is especially important to be able to efficiently suck in oxygen and to breathe unhindered, as breathing accelerates considerably at higher speeds. If the area of ​​your chest is very immobile or depressed, you simply will not be able to pull your lungs and the diaphragm and the other muscles that support your breathing will not be able to function in the best possible way.
The game becomes breathless and you can even feel your chest tighten. Rotations and activation of the shoulder region help increase upper body mobility. For example, an exercise with a stick and an elastic band should be considered a routine both during the work day and at home.
Avoid injuries
Before continuing with the hills, you must remember that intensive training requires at least six months of basic training, jogging and a very good basic condition.
In particular, the joints and tendons are tested in hilly terrain, unless they have already been stressed by, for example, interval training or five-kilometer fast runs. So do speed exercises in the plains before conquering the wildest hills.