Today we’re talking about summer running, take summer is my least favorite season of the year to run but I’ve learned a lot of tricks that help me along the way, and I’m going to share those with you today:

My first tips is hydration hydration hydration in the summer you sweat way more, so you definitely need to make sure you’re taking influence before you run during your run and after run, even more than you normally what the rest of the year. If I’m running more than an hour I like to use some kind of electrolyte drink my favorite right now is the scratch macho green tea and lemons it’s really good. 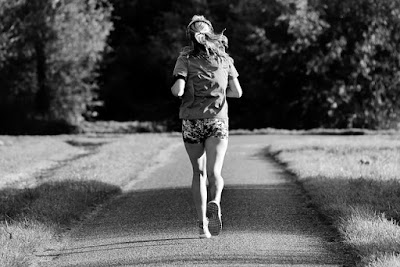 Another tip is to freeze the water bottle that you’re gonna take on your run the night before bill about halfway, and lay on its side that way when it freezes won’t freeze them out and you can fill it up the next day, and your water will be called the whole rest yourself by your own number to avoid the heat, do not run in the middle of the day the best part of the day it’s definitely early in the morning or after sunset to beat the heat. I definitely prefer running in the mornings just get it over with and you’ve got the rest of the day to enjoy also make sure you don’t forget reflected fair if you’re going to run it.

Number three : To slow down it’s a good rule of thumb to give yourself about two weeks to acclimate to running in the summer, if it’s about eighty degrees expect your pace to slow as much as fifteen or twenty percent, so that means if you normally run at ten minute pace in the spring you might be looking at more of an eleven or twelve minutes in the summer for the same amount of effort.

Number four don’t get discouraged, it’s easy to get down on yourself in the summer when your pace is slowing down, but don’t worry it’s totally normal running in the summer, is really hard but don’t strain your pace will pick back up when the temperatures cool off in the fall you will be stronger runner for running through the summer.
Number five vacation running thank you summer vacations an excuse to run somewhere different insight. I’ve running Florida in Vermont around Central Park in all these trends have been some of my favorite and best friends that I’ve ever gotten blasted helps balance out all that vacation eating and my right number six running in the rain nothing is more refreshing in the summer been running in the rain just make sure there’s no lighting number seven keep a towel in the car at all times you’re going to run in the summer you’re going to sweat so trust me you’re going to want to tell on the card is set on it.